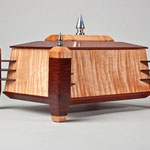 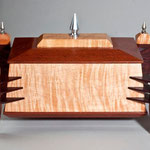 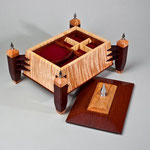 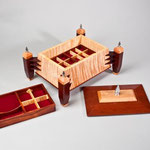 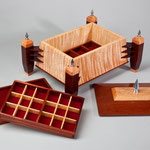 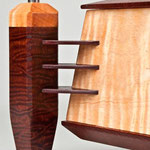 So I thought to myself…why not do a design where the splines support the legs. It seemed a little uncommon but I knew I could make it work….and the design work for “Spiker” began. To make it even more of a challenge I made the shape of the box taper upwards. By doing this each of the three splines, that strengthen the box and hold a leg, is a different size. They become smaller as they go up. Overall the design is very solid, low to the ground, but the taper draws your eye straight up to the tip of the spike. In the end I think I was heavily influenced by our beloved family member, Spike, the best dachshund around:-)

The body of the box is constructed of Curly Maple with a Leopard Wood base. The splines are Paduak and they extend into the legs which are made from a glue-up of Curly Maple and Pomelle Sapele. They are then topped off with a chrome spike. The Pomelle Sapele has to be one of the most beautiful woods I ever used. The movement in the figure is mesmerizing.

The lid is made from Leopard Wood with a Birdseye Maple cap. Both have been tapered to draw the eye up. It is also topped off with a chrome spike that plays double duty as the handle to the lid.

There are two lift out trays and one base divider to the box. They are all made from Hawaiian Koa. The trays use box-joint construction. The dividers in the two trays are Curly Maple. The two trays naturally lower themselves into the box by air pressure. All have been lined with red velvet.

"Spiker" is in a private collection.