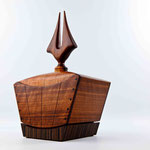 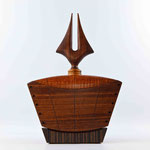 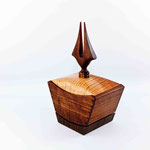 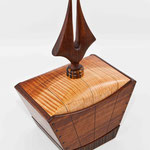 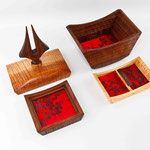 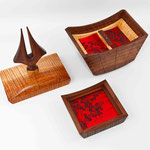 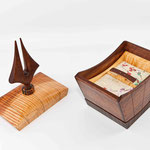 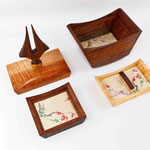 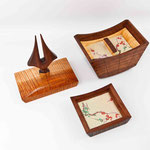 The design for “Aspire” was spawned from the strong feelings I had following a public art exhibit I participated in. It was such an amazing night of art and community I knew I wanted to capture some of that energy in a new piece…the design work for “Aspire” shortly followed. It is meant to pull your view up and up as would aspirations in your own life. Starting from a central starting point of awareness our aspirations will grow and make us who we are today and who we want to be in the future.

The main body was constructed of quartersawn curly black walnut using a rabbet joint. The joint is further enforced using (20) 3/16” diameter handmade gaboon ebony dowels. Once together I cut the 10” radius top and bottom. 1/8” pieces of crotch walnut where put into the box to support the tray. Using more QSBW I made a frame that inserted into the bottom of the box. That created a flat on the bottom. I made a fixture and used a 60 degree sign making bit to route the shallow “rays” into the box sides. The center of the “rays” is actually the center of the 10” radius on the lid. There is a large rabbet for the lid to fit.

The base is constructed of black walnut. It was roughly cut to size and then veneered in a manmade black/white ebony veneer. The veneer just added a vertical movement that really complemented the shape of the box. It was also designed to leave a 1/8” shadow line when the body of the box was sitting in it.

The tray is made from curly maple using the same rabbet joint design. The 10” radius cut was put in and then I started forming the handle. The handle actually has the same 10” radius. I soaked a piece of curly maple in water and then placed it into a clamp to let it try with a curve. After that I cut off a piece, sandwiched it between two pieces of rosewood veneer and then clamped it into a fixture to dry. All radii where formed from rasps and files. Those small Japanese rasps with milled teeth are awesome! The handle portion has two 1/8” diameter hand-made maple dowels to hold it in. All joints on the tray where reinforced with 1/8” diameter hand-made black walnut dowels.

The lid started life as a 2” thick piece of curly maple. It was cut into four pieces and a thin piece of black maple veneer was glued in place. The veneer matches up perfectly with the “rays” in the box body. After getting the rough lid to fit into the box I made a hardboard guide to cut the 10” radius into the lid and body. Once that was cut I marked where the 10” radius was on the body and where the 1.5” circle of the spire would be…then started the shaping of the top using a Foredom and cabinet rasps. the base of the spire was turned out of black and white ebony. The spire started life as two equal pieces of QSBW with a thin piece of black maple veneer between them. I turned just the bases of them on the lathe and the rest was formed using some compound cuts on the bandsaw, guide hole on the drill press and then LOTS of shaping with the Foredom and rasps.

I actually made two of the boxes at once and lined each one with a different Asian inspired fabric.

The "Aspire" box with the red interior is in a private collection.  The white interior box is still available.