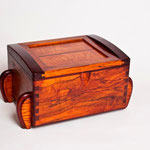 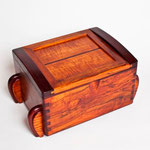 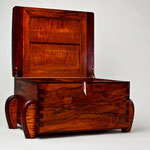 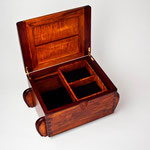 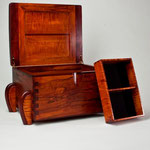 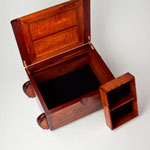 “Horizon Line” was a spur of the moment build. Everything about it sprang from my head and no plans were ever drawn up. The spark was a single piece of curly maple I had laying around. I had just set up my first bandsaw and thought the piece would look nice book-matched. After doing so I realized it looked like the horizon line during a Lake Michigan sunset. I glued up the panel, using a piece of Paduak to act as the distinct line, and that became the center lid portion. After framing it with spalted maple frame I used a sliding dovetail joint to mate the panel to thick, curved Paduak ends…to give it a treasure chest feel.

The main portion of the box is made from spalted maple and uses thru dovetail joints. It is capped on the top and bottom with Paduak. There is also a dadoed in ledge of Paduak for the drawer to rest/slide on.

The legs are a sandwich of Bubinga and curly maple. Bubingo in the middle flanked by two pieces of curly maple. With the box being of a very stout design I wanted the legs to look thick and solid to ground everything.

The drawer is made from Curly maple and uses box joint construction. The center divider is held in using a mortise and tenon joint.

Brusso hinges were used on the lid.

The finishing process of this box was quite lengthy. I started with an Early American Maple Dye. When that was dry I soaked the entire thing in Boiled Linseed Oil and sanded it, while wet, with 220 sandpaper to fill the figure. I let the BLO dry for two weeks. Once dry I wiped the box with a 2lb cut of Orange Shellac. After that came three hand-rubbed coats of Oil Varnish. And then….its was buffed with two coats of BriWax.

"Horizon Line" is in a private collection.