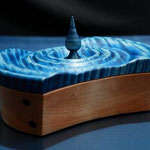 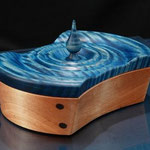 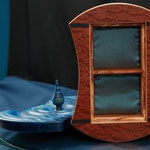 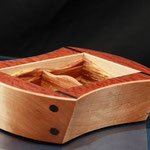 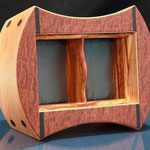 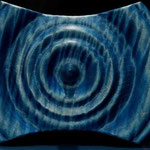 The inspiration for “Ripple” came from my younger years of growing up in a small town along the shores of Green Bay up in Wisconsin. Every Sunday in summer was spent at Grandma and Grandpa’s house swimming or fishing (and building the occasional rubber band gun or sword with my Grandpa). I was always amazed at the ripple of the water caused by either a skipping stone or an oncoming rain storm. I wanted to capture this fluid movement in “Ripple”. The lid obviously portrays the rippling water and the base is the windswept sandy shore.

The body of “Ripple” is made from 2” thick Maple. It is fastened together using mortise and tenon joinery with walnut dowels to further strengthen and add a nice contrast. Knowing that I was going to shape the box I wanted the dowels because their final shape would be more oval than round…so closer to a water drop shape. The grain of the Maple was positioned to create an undulating pattern. It gives a nice flowing pattern around the entire box. The sides were all cut with a 10 degree slope. This created a smooth transition between the concave and convex cuts and really emphasizes the top lid. The top of the body has been veneered with pommele sapele, because of it beautiful waterfall grain, and dyed black maple veneer. The inner divider was made from spalted maple with a very pronounced swirling spalt/grain. It started as a standard rectangle but then I carved it into an undulating wave pattern that I further refined using a spindle sander and rasps….once again going for the fluid movement. I added a small chamfer to the top edges to create a subtle shadow line between the base and lid. The interior is lined with shimmering blue padded taffeta fabric….it had a great fluid look to it.

The top lid is made from curly maple. I studied water ripples (online videos, pictures, self tests, etc.) and lined the area around the lathe with pictures of water ripples…nothing like visual aids when turning! It all started from an 1.06” thick piece of wood. The water drop was turned separately, with a tenon, and glued into position. I used General Finishes water-based Blue stain dye. The top lid also shares the same 10 degree slope as the body. This gives a clean transition from body to lid and almost makes it look as if the water will spill over the edge.

There is also an underlying fluid movement and that is the a movement between two woodworking etiquettes. I wanted to have a smooth transition between flat work and turning and that would be the flow from the base into the lid. The eye never really stops between the two.

“Ripple” is 10” in diameter and about 3.5” tall not counting the water drop. It was finished with four coats of Danish oil followed by two buffings of BriWax.

Overall I had a blast designing and making “Ripple”. I will definitely be doing more boxes with the water theme in the future.