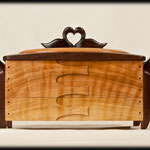 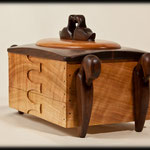 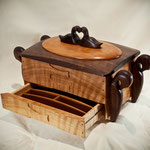 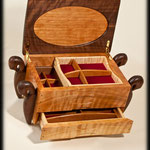 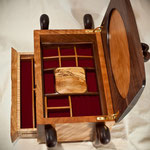 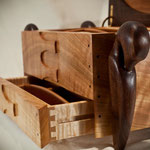 Well Christmas has come and gone so I can finally post the most recent box without giving away the secret! “For Kjærlighet” , which means “For Love” in Norwegian, was a commission piece for a friend’s wife. I thought it should be named for the same reason it was being crafted. It began as conversations about what she liked; colors, woods, ideas, etc.. He said that she had stated at one point that she wanted to start collecting Norwegian art. We both started our research and at first came up empty handed. With more digging we found, as if it was sent to us, the classic Norwegian Tine boxes. What could be more beautiful. The only problem being that with the wanting of a drawer and a hinged lid the traditional design would have to be changed. What you see is my representation of a classic Tine box.

The main body is made from a piece of curly cherry. I went through the entire bin at the lumber store and at the bottom I found this board that was so crowned I didn’t think I would be able to use….but looking at the grain I knew I had to try. Luckily I was able to make the straight cuts, get the best grain in front and save the board. The grain wraps continuously around the entire box. The carved design on the front of the box represents the way the traditional boxes used steam bent wood that overlapped itself. To represent how these overlapping pieces were sewn together I used self-made 1/8” diameter black walnut dowels in a crisscross pattern at the corners of the box. The dowels also play a part in securing the miter joint by extending through one piece into another (except on the drawer portion where they are only for visual affect).

The main body of the slide out drawer is made from curly maple. I used a blind dovetail for its joinery. The drawer slides on maple runners that are slot jointed into the inside of the main body. The front is of course part of the same piece of wood as the front of the box. I used the thinnest kerf blade I had to cut it off as to not disturb the grain pattern.

The legs are made from quartersawn curly black walnut. I researched swans to get some inspiration and while looking at pictures that I printed out I drew out the shape you see. After that I made copies and did a compound cut using a combination of the scroll saw and bandsaw to get the rough shape. Then came all the hand carving using chisels and rasps….and a lot of hand sanding. They are held onto the body using a long slot/spline joint. This allowed me a bit of height adjustment when attaching them. Original Tine boxes would sometimes have animal shaped carvings at the ends of the boxes that acted as the locking method and legs. The swan legs are my representation of those.

The lid is made up of a book matched piece of quartersawn black walnut, curly cherry and the top carving was a piece of Black Walnut crotch. The curves around the perimeter of the black walnut lid are traditional to what was on the original Tine boxes. All the curves where done with a block plane. The curly cherry oval insert represents the original oval shape of a Tine box. The insert was shaped with cabinet rasps. It is actually a floating panel in the lid. I cut slots into the lid pieces and a slot into the insert. When I joined the two walnut pieces the cherry insert is captured. I used a doweled joint to strengthen the joining of the walnut pieces. The top carving was done using a compound cut on the scroll saw followed by power carving and rasps. It uses dowels to attach it. This design is reminiscent of the crowning designs on traditional Tine boxes as is the overhang of the lid from the box body(I did 1/4”).

The interior tray is made from curly maple using a spline/miter joint. The divider in it was designed to split the interior of the tray into the shape of the flag of Norway.

The divider at the bottom of the main box compartment is made from quarter sawn black walnut. I used a small mortise and tenon joint for the center horizontal pieces and a butt/dowel joint for the verticals. The small cover is made from spalted maple and stays hidden under the tray. I used a spindle sander to made finger positions to remove it.

All the removable dividers where made from quarter sawn sycamore. I used a combination of dado joints and half lap joints to construct them.

The box was lined with red velvet throughout. Finish is three soakings of Danish oil followed by two buffings of BriWax. It is roughly 17” x 9” x 11”.

I was very excited to deliver this box I was lucky enough to have them over Christmas night. There is nothing more satisfying than seeing the tears of happiness come from the new owner.

“For Kjærlighet” is in a private collection.